Rilski Sportist are the champions! 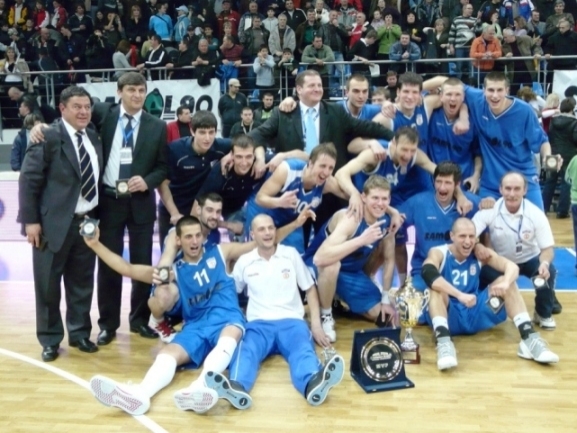 Rilski Sportist are the winners of a great and immensely competitive inaugural edition of the Eurohold Balkan League, after a suitable thrilling season finale in their Arena Samokov. The Bulgarian hosts of the Final Four defeated Macedonian opponents Fersped Rabotnicki in a very close final game that was only decided in its last 2 minutes for a final score of 84-77. MVP of the Regular Season Travis Peterson scored 18 points and grabbed 12 rebounds in that one to become the MVP of the Final Four as well. His teammate Branko Mirkovic scored 9 of his teams 10 points in the last two minutes (a trey and 6 free throws) to finish with 14 and help his team lift the cup.

Rilski Sportist had a good start with two baskets by Peterson, followed by some great work in offence by shooting guard Ivan Lilov. The hosts led 8-2, but a 24-second clock buzzer beating triple by Toni Simic started Fersped`s come-back and it was soon 8-9. Then Dragoslav Papic`s pin-point shooting (a 3 and a 2) gave the home team a 4-point lead (13-9), which they kept at the end of the first quarter, as Peterson got going again and scored the last two baskets of that one for 19-15.

The talented American center netted a triple soon after the start of the second period too, which gave his team a 22-17 lead, and he had a close miss for another one, with two successful free throws in between. That meant the last 9 points for Rilski were Peterson`s and soon it was 15 in the bag for him as the hosts led by 2 or 4 on alternative possessions. But Nenad Zivcevic first equalized (28-28) and then put his team in front at 28-30, with his two baskets in a row. He made it three in a row for 31-32, as the two teams were trading leads. Veteran substitute Leven Belberov was firing on all cylinders to keep Rilski Sportist into that sequence and then youngster Ivan Lilov`s trey opened up a 4-point lead for them - 37-33. But Toni Grncarov quickly returned the favour with his own bomb from downtown. Yet, the Bulgarians kept a slender lead into the half-time break - 40-38.

Rilski`s first successful offensive play of the second half (for 42-38) was followed by several unsuccessful and Fersped took advantage to lead 42-25. The Macedonian team, who had devastated their compatriots Feni Industries with some brilliant three-point shooting a day earlier, was not on such a hot streak from behind the arc tonight (just 3/14 in the first 20 minutes). But they seemed to be finding their shooting touch in this second half, as it was triples by Tasovski, Simic and Trajkovski that kept them in front for a while. Then Lilov showed he can score from long distance too and tied the scores at 56-56. With 6.5 seconds to go to the end of the third period, Rilski Sportist had an opportunity to take the lead for the first time since they led 49-48, but their last possession was fruitless and they trailed by 1 point - 58-59 - after 30 minutes of play.

At the start of the last quarter the battle on the court became quite rough with a few players from both teams hitting the floor and no score in the opening 100 seconds. After the possession changed wildly several times, Rilski Sportist point guard Branko Mirkovic netted a triple to start an 11-2 run by the home team, which culminated in a nearly rim-breaking dunk by Bogdan Boev for 69-61. Of course, the Fersped players weren`t going to lie down and surrender, although the already enthusiastic home crowd in Samokov had got going even more. The Macedonians got within 4 points of their opponents at 71-67 and within 3 at 72-69. All they needed now to get on equal terms again was one of their trademark triples and they got it from Tasovski - 72-72. But then Peterson, who had "gone to sleep" woke up just in time - he drew a foul and went to the line to score his very first 2 points of the second half; Mirkovic followed that up with a triple after some good defensive work by his team, as well as 2 successful free throws of his own and suddenly his team had a 7-point lead - 79-72 - with just 58 seconds to go. Then the "clock-stopping foul" tactics by Fersped began, but they could only score a trey with just 12 seconds to go (81-77) and by then it was too late. Mirkovic kept on being fouled and kept on scoring from the line. Then Peterson scored his 18th point of the game from there too and his team and its home crowd celebrated a famous victory.

Besides Peterson and Mirkovic, young Serb Dragoslav Papic was most valuable for the winning team, as he led the scorers with 19 points. Ivan Lilov had 14 points, while Mirkovic, dished out 7 assists.

Dime Tasovski, who was the only one challenging Peterson for the MVP of the Final Four honours (had Fersped won the cup, he would have probably become MVP) was the top scorer for his team and the co-leading scorer of the game with 19 points. Four of his teammates were able to reach double figures in scoring - Simic (12), Stojanovski (11), Filipovic and Zivcevic (10 apiece), but no one was able to take charge and lead his team to a better outcome in the final minutes of the game.