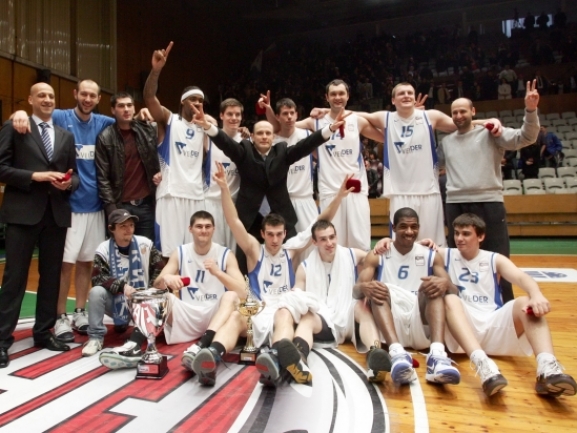 The team of Levski Sofia is the champion from the second edition of the EUROHOLD Balkan League. In front of 3000 spectators, who didn`t stop supporting their favorites, Levski defeated the young and talented team of Lovcen Cetinje by 12 points - 65:77.

In the first half of the game, Lovcen showed great desire and really good basketball, and was close to Levski all the time. The first quarter started off with an 8:2 run by Lovcen. Levski answered with another run - 7 to nothing, and Titi Papazov`s squad were up by 1 point -8:9 with 6.34 to go in the first period. Lovcen continued to perform strong, and once again were in front of their opponents -13:9 after a two-pointer by Damjan Kandic. Both teams continued to change the lead, and were tied a couple more times in the first quarter which finished 18:18.

Lovcen started the second half with a major problem - one of their best performing players - Damjan Kandic didn`t enter the court after halftime. In the begining of the third period, both teams weren`t able to score a basket for almost two minutes - Stefan Georgiev scored for 35:41 with 8.10 remaining. With 6.25 until the end of the third period, Levski had their biggest lead so far - 12 points, after a dunk by Aaron Harper on the fast break. Bojan Pelkic decreased his team`s losing down to 10, but it was obvious that Miodrag Cadija`s squad struggled to get any chances on offense, as they dribbled out the 24 seconds a couple of times, without managing to get a shot. After 30 minutes, Levski were up by 14 - 46:60.

Levski`s lead continued to grow, as we entered the closing period, as three minutes into the last quarter, Lovcen were down by 23 - 49:72. Until the end Lovcen didn`t manage to get back in the game, and finally the score was settled at 65:77. In the end Konstantin Papazov gave chance to two of his youngsters - Nikola Gajdadjiev and Vasil Aleksandrov, as Aleksandrov even scored a three-pointer.

Aaron Harper led his team with 22 points, as he also had 6 rebonds and 5 assists. The team captain Stefan Georgiev gave another solid performance, and was named MVP of the Final Four, after 14 points, 8 rebounds and 6 assists. Donald Cole also added 14 points, and Zlatin Georgiev finished with 10. Gjorgji Cekovski came off the bench scoring 7 points.

Bojan Dubljevic had another impressive performance, finishing with 23 points and 11 rebounds, entering the game from the bench. Damjan Kandic finished with 15 points and 5 rebounds, but he played only in the first half.  Those were the only two Lovcen players who finished in double digits.

Levski are the second team to become EUROHOLD Balkan League champions, after Rilski Sportist did it in the competition debut last year. At this point, Bulgaria is the most succesfull country in the 2-year history of the BIBL, as in the two Final Four tournaments there were a total of three Bulgarian teams.


The program for the Third Stage is set