Konstantin Papazov, head coach of BC Levski: We are going to Prishtina with one goal - to win the trophy 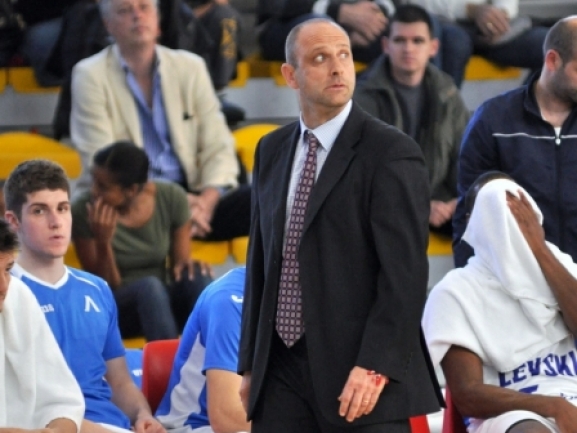 22-04-2014 | 13:13 |
The first semifinal of EUROHOLD Balkan League sees a battle between Bulgarian teams BC Levski and BC Balkan. Their match is on Friday during the first day of Final 4 2014 in Prishtina. Here are the words of Levski′s head coach Konstantin Papazov a few days before the clash:|

"Our team is fine. The win against Lukoil Academic brings us positivism, faith, confidence and good mood. The most important thing is our players to have respect for the opponent which comes naturally because Balkan defeated us twice in Bulgarian league. We did it once and this victory came mostly because of our character and not that we show any class. I personally have a lot of respect for the coach and the team of Balkan and I think this is enough for us to go in to this game very very seriously and with very very big responsibility. Levski has a serious potential to win EUROHOLD Balkan League and this goes through an extremely important semifinal that, in my opinion, will be heavier from a psychological point of view that the final.

I know very well the class of my players and we know our opponent. I also know, just like he knows me, my friend Aleksandar Todorov but unfortunately in this game only one of us will be the winner. The one that deserves it more will play in the final and this will be sixth straight final for a Bulgarian team which can only make us proud. Yes, this tournament is not the Euroleague, but we have to be realistic and to know what the level of Bulgarian club basketball is. EUROHOLD Balkan League is a good level for us and the Bulgarian teams justify the participation in it with their performance.

I can say it′s a plus that my players are more experienced. I cannot deny though that Aleksandar Todorov has managed to bring an extreme energy and faith in his players. He can do that very well. He has a lot of confidence and he himself believes a lot in his knowledge and posibilities as a coach and manages to convince at maximum his players as well. He manages to give them faith and self-confidence which is very important in such games. However despite all that, I think Levski is the favourite and I say that with the knowledge that it might motivate even more our opponent. Until now they are more successful in the Bulgarian championship but Levski won the Cup. The only competition that finished so far this season was won by Levski. We also have to believe and know what value and class we have. We have, I repeat once again, a huge respect for the coach and the players of Balkan.

Surely the atmosphere in Prishtina is amazing. I really wanted Levski to host the Final Four, because on the 27-th of April we are planning a big celebration for 100 years since Levski’s foundation and this is the reason I wanted Sofia to host the finals. I didn’t insist that much because of the support from our fans although I am sure with their support it would be unusual for us not to win the trophy. I really wanted us to host the Final Four, but in a conversation with Mr. Shtriks I agreed that if I were the sports director of EUROHOLD Balkan League and I needed to make an adequate decision for the good of basketball and for the good of the tournament the right choice is Sigal Prishtina to host the event. During the season with their amazing fans and the offered conditions in their presentation they proved that they deserve to host the tournament. It is a big challenge for their country, but I am sure they will make the best possible organization and I know Levski goes to Prishtina with no other goal than to be the champion of the EUROHOLD Balkan League.

In my opinion, which of course is tendentious, we have the biggest potential, but in the games it is also a matter of good team organization. If we can be close to our best shape, I believe we can win the trophy. But this doesn’t secure the victory for us. It has to be earned. In the semifinal there’s going to be a psychological battle against Balkan. We respect our opponent a lot and we are also confident because of the experience and the abilities of our players. Levski’s players are born winners and this is one of the reasons that make me believe we will succeed."