Everything to be decided in Samokov 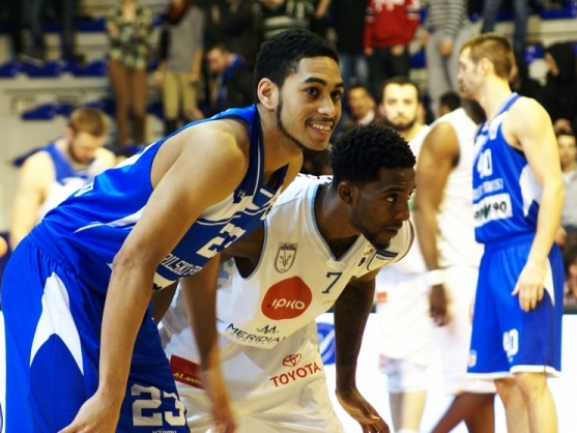 21-04-2015 | 21:20 |
KB Sigal Prishtina took a small advantage after the first Final game of EUROHOLD Balkan League. At home the team defeated BC Rilski Sportist 74-72 which means that everything will be decided in Samokov next Wednesday, 29th of April. The visitors led for most of the game but the home side had the chance to take a good lead after turning the score in the last quarter. However Rilski cut its deficit and left the overall tie wide open.

Both teams started the game well and scored a lot of points. At one point Rilski managed to take the lead and even managed to build some advantage. After Vernon Taylor scored at the buzzer to end the first quarter, the visitors went up by 6 points and they started the second on a 5-0 run. The lead went to double digits and Sigal cut it after 8-0 run that was stopped by Darin Ivanov triple. Then the visitors stayed in front and at the break led by 5 points after Bojan Trajkovski scored a three-pointer with few seconds to go.

Shortly after the start of the second half the hosts tied the score but Rilski answered and kept leading. Later Sigal once again tied but still the visitors managed to have 1-point lead after 30 minutes.

The home side started very well the last quarter and scored the first 9 points in it to take the lead. Rakocevic scored after 3.30 minutes played for the visitors  but then Bavcic responded with a triple. In the next offense after a unsportsmanlike foul Rilski managed to score 5 points and then Norfleet added a three-pointer to cut it to 1. Bavcic though again scored one of his own and then with 3.56 to go the lead went to 6. Mavunga scored again and then Rilski played good in defense to cut the deficit to 2 points with 1.31 to go. This turned out to be the last basket of the game as then both teams couldn′t score.

Edin Bavcic finished with 23 points and 8 rebounds for the home side while Dardan Berisha added 18 points.

For the visiting team Zarko Rakocevic had 21 points and 9 rebounds while Vernon Taylor added 20 points.
FULL STATS FROM THE GAME KB SIGAL PRISHTINA - BC RILSKI SPORTIST