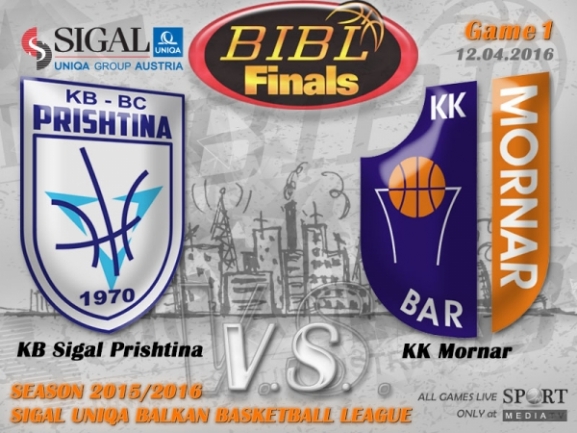 Tonight Prishtina will host the first game of the Finals in SIGAL-UNIQA Balkan League season 2015/2016. The local side and current champion - KB Sigal Prishtina will welcome KK Mornar at 19.30 hrs local time and what is expected to be a packed gym.

Both teams reached the final after winning their Second Stage groups and then going through semifinals. They played against each other and exchanged away victories. However it won′t count for anything tonight as it′s the final and everything is different.

On the point guard Sigal will count on Willie Kemp who will have to task to fight against high scoring Lamont Jones. However it′s most likely that Stanimir Marinov will receive the task to defend Jones who is the top scorer of the competition since joining Mornar. The team from Bar will also count a lot on Marko Mijovic whose experience and playmaking skills are valuable as both can get playing time together. Andrew Warren is an important asset from the bench for Sigal and the home side will look for him to step up.

Of course on the wing there is also Dardan Berisha whose role is pivotal for Sigal. The task to stop him will probably belong to Marko Calic as the Montenegrin is a very good defender. Mornar has also Balsa Radunovic who has a lot of experience, a good height for his position and will try to use that as an advantage.

Sigal Prishtina defeated a lot of opponents thanks to dominating under the basket. Jason Washburn and Mohamed Abukar are having a very good season and are very hard to stop. Washburn is a very good rim protector as well while Abukar can score from everywhere. On the other side Mornar will put players like Sampson, Vujosevic, Mikovic and Perovic. They for sure lack the experience of their opponents but have the height and bodies to fight with them. Their size matters and is one of the reasons why Mornar is good in offensive rebounding which is something Sigal will try to stop.

The team from Bar also has an advantage in having the possibility to have more players coming off the bench. Alongside the above mentioned, the youngsters Mugosa and Hadzibegovic usually also receive playing time and can be count on. From the other side the captain Edmond Azemi and for a short period Gazmend Sinani can step on the court, but it′s mostly six players that are doing the damages for Sigal.

The game will be broadcast LIVE on SuperSport, RTCG, BNT HD and Sportmedia.tv. There′s no doubt that the gym will be full and the fans will create a great atmosphere. One worthy of a final.