The road to the title is still wide open 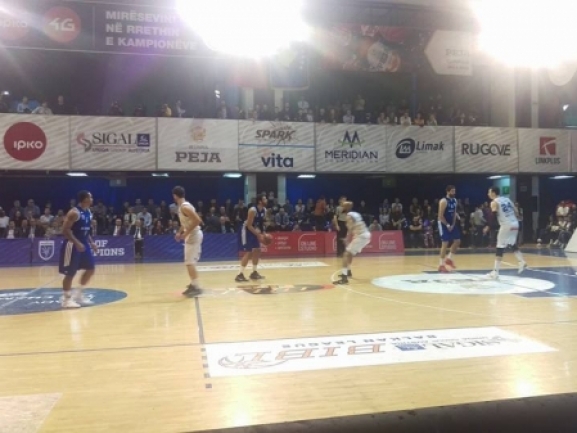 KB Sigal Prishtina made a big step towards winning the Balkan League for second season in a row. The champions hosted KK Mornar in the first game of the Finals and won 82-68. Sigal played very good defense in both second and third quarter managing to build a big lead and then hanging on to it until the end. Still of course nothing is yet over as Mornar will have the chance to overcome this deficit in the second game at home. The Montenegrins did the same thing in the semifinals after losing to Kozuv by 15 points in the first game. Then however they managed to erase that deficit so it′s still a wide open battle which will be decided in the second meeting. It will be played next Wednesday, April 20th, at 20.00 hrs local time in Bar.

It was an interesting start to the game with both teams exchanging points. At one point in the first quarter the visitors made some good plays and with a 9-0 run managed to take a 6-point advantage. Then they led until the end of the quarter but a Willie Kemp triple just before the buzzer cut that advantage to only 2.

The second quarter started very even but Sigal took advantage of some Mornar mistakes to go up by 6. Moments later with the hosts leading by 4 they made a 7-0 run to take the first double-digit advantage of the match. The visitors responded by scoring the next four points but then Jason Washburn dunked just before the break as Sigal led by 9 after 20 minutes.

As the second half started the visitors scored the first two points but then Sigal added the next 5 to go up by 12. Once again it was cut to 9 but then Dardan Berisha scored two triples, after him two of his teammates 2 of 4 free throws to make it a 17-point game. Damjanovic answered with a three-pointer but then Berisha hit two more for advantage of 20 points as it remained the same after the end of the third quarter.

In the last period Mornar managed to close the gap to 14 but Berisha was left alone and didn′t miss for his 5th three-pointer with 5.30 to go. Until the end both teams continued to exchange points as the visitors were trying badly to close the gap. They managed to cut it to 12 with 43 seconds to play and then Stanimir Marinov missed two free throws. Then Mornar also didn′t score and Willie Kemp made two free throws. Still the visitors had one more chance but again couldn′t score and the game finishede with 14-point difference.

Dardan Berisha was the top scorer for the winners with 20 points as he added also 6 rebounds. Mohamed Abukar had 17 points as Jason Washburn made a double-double with 15 and 10 rebounds.

Again it was Lamont Jones who was the top performer for Mornar finishing with 22 points and 7 assists. Balsa Radunovic had 19 points and 6 rebounds but the two received very little help from the others.