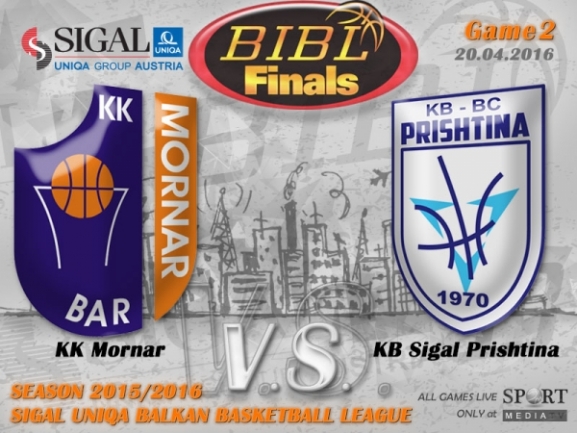 The last game of season 2015/2016 in SIGAL-UNIQA Balkan League is to be played tonight. At 20.00 hrs local time in Montenegro KK Mornar will host KB Sigal Prishtina in the second and decisive match of the Finals. It will be broadcast LIVE on RTCG, SuperSport, BNT World and Sportmedia.tv.

Sigal Prishtina is carrying a 14-point advantage after the first game which is of course is something very imporant in this final. However there′s no doubt that Mornar will fight very hard and will give everything to erase that deficit.

The hosts will rely mostly on Lamont Jones and Balsa Radunovic who are their main scorers. Generally as a team, Mornar shot very bad in Prishtina and this is something they need to address tonight. Of course the home side needs more players to step up tonight and get some points. Jones and Radunovic combined for 41 of 68 in the first game and tonight the things have to be different. Mornar will rely on aggressive defense, then will hope that the shots will fall down and with some enthusiasm to erase the deficit. The head coach Djordjije Pavicevic can rely on a deeper roster and this could prove to be effective in the final minutes.

Sigal Prishtina on the other side has that big advantage but the team knows that nothing is decided. The current champions played with good spirit at home which helped them in the second and third quarters but couldn′t finish off their opponent. The performance of Jason Washburn and Mohamed Abukar will be very important as their presence under the basket is felt both in defense and offense. Of course Dardan Berisha is a constant threath, especially from outside, and he can explode in any moment. Sigal will rely mostly on six players and it′s something that can affect the team late in the game. However there′s enough quality in those six players, they know how to play and will perform hard to keep the advantage.

So - it′s Mornar for first time or Sigal Prishtina for second in a row? Enjoy the final and let the best team win.