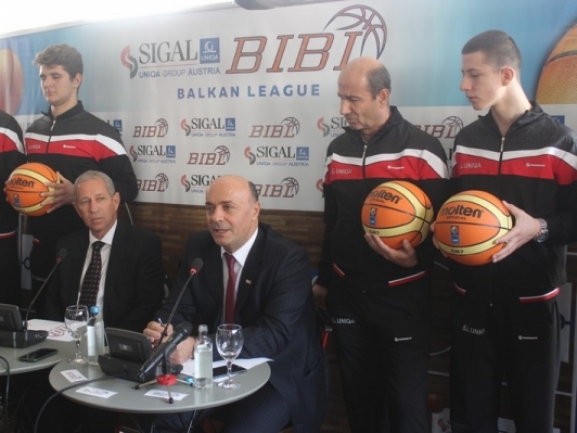 The Finals of SIGAL UNIQA Balkan League are just days away and we are eager to see Beroe and Kumanovo fighting for the trophy. Here is what the Sports Director of the competition - Mr. Shay Shtriks, had to say before those matches:

"BIBL Final games will take place on 11.04.2017 in Stara Zagora  and 18.04.2017 in Kumanovo. I would like to wish the two teams BC Beroe and KK Kumanovo 2009 to have high-level basketball event, strong and quality games which will be supported with very good, correct and fair officiating.

I am very happy to say that the system of season 2016-17 continues to prove itself. During season No 9 of SIGAL UNIQA Balkan League we had 4 teams from 4 countries in the Semifinals which showed that the games and the results from game one up to the end are important and can influence the ranking in the end of the season.  We faced a lot of interesting games, drama and most importantly quality basketball.  Most of the gyms were full and the spectators enjoyed almost every moment.

The officiating in general was very good and correct, and no game was decided by referee’s decision. The best teams this season qualified to the finals.

Most of the coaches, players and managements gave the maximum during the long season of BIBL. The players performed with big desire to win both when at home and away. Unfortunately, we faced this season problems that we never had in the past - some of the clubs could not give the maximum during the long season, during some games, the behavior of the spectators was far beyond sportsmanlike. We had to stop two games during the season. We had to cancel a game and we will do our best that situations like this will never happen again in our league. We learnt from our mistakes and in the next season, the 10th one of BIBL, we will avoid all of them.

I would like to send big THANK YOU to all the staff from the Balkan League. They have been working every day during the year to support and provide to all the clubs the best possible conditions and service so they could concentrate only on basketball.

In the 9th consecutive season our league, I would like to thank our main sponsor SIGAL UNIQA and Mr. Avni Ponari himself for standing behind us and continuing to support the league for a second season. We do hope that the very good cooperation will continue in the future. Moreover, I would like to send big thank you to Mr. Assen Christov and the whole management of EUROHOLD which continues already 9 seasons to support the project. We could not provide those very good conditions as an international league if it were not for all of them. It is the longest and strongest cooperation between any basketball organization and their sponsor and for that I am enormously thankful and I do hope to continue with this great collaboration in the years to come as well.

I am very happy that FIBA recognized the value and the contribution of SIGAL UNIQA Balkan League to the basketball in our region. Our responsibility is to continue with the professional way, cooperation with FIBA, Federations and the clubs, to provide the best conditions to the clubs and the referees and to offer to the basketball fans in our region quality, correct and strong basketball competition.

Next season will be the 10th anniversary season of BIBL, we will provide a quality league, strong competition and interesting games, we will avoid our mistakes from season 9. We will go back to the system of Final Four in the end of the season and we will do our best to have 5-7 countries and 10-12 clubs, playing according the same principle for calendar, with the cooperation of the national federations.

Now comes the time to enjoy the two great final games between BC Beroe and KK Kumanovo 2009 and may the best team win!"