Finals, Game 1 preview: Beroe and Kumanovo are ready for the big battle 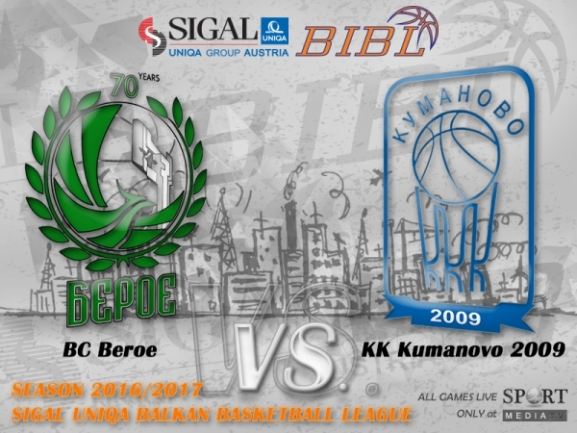 Tonight Stara Zagora will host the first game of the Finals of SIGAL UNIQA Balkan League for season 2016/2017. The local side BC Beroe will welcome KK Kumanovo 2009 in it′s expected to be a packed gym. The match will start at 18.30 hrs local time (17.30 CET) and will be broadcast LIVE on BNT HD, TV Sitel and SportMedia.tv.

Both teams reached the final after winning their groups in the Second Stage and then going through the semifinals. Beroe dominated against Teodo, especially in the second match, while Kumanovo ousted Peja after a dramatic win at home. Those teams played against each other in the First Stage and exchanged wins but it won′t count for nothing.

Beroe will count on its deeper rotation and aggresive play. The Greens count on the experience of Raley-Ross and Aleksiev at the point guard as they′ll have to lead their team′s offense. Of course there is a possibility they can play together but on the wings head coach Lubo Minchev will count on Shane Gibson and Tihomir Zhelev. There is also Nikolay Nikolov who is however having problems with the heel but will probably play. Tencho Tenchev though is will probably be out which can open the door for Martin Radnev.

Under the basket Beroe relies on other four players. Gudul and Jones are the athletic ones while Tesija and Todorov offer a more reasonable play and bring the experience on the court. All those player are giving coach Minchev a deep enough rotation which he will try to use and gain the necessary advantage after the first game at home.

Kumanovo is on the other side as the Macedonians rely on seven player rotation. Yonel Brown is quite explosive and brings enough energy while Karadzovski, Pekovic and Zivanovic are adding experience on the wings. There is also Karakolev who is coming off the bench who shares time and both 3 and 4 positions. Under the basket there are only Janeski and Pekovic which could turn out to be the problem for Kumanovo. The two of them will have to cope with the four from Beroe and without doubt it will be a difficult task. However we are more than sure that the Macedonian side won′t give up and will put up a fight.

All that′s left for us is just to enjoy the game and let the best team win. Don′t forget also that there is a second game in a week time and we are looking forward to it as well.