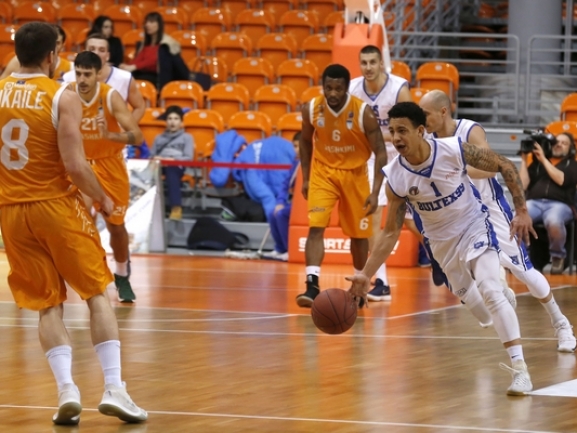 BC Akademik Bultex 99 recorded its fifth win of the regular season. The Plovdiv team defeated KB Bashkimi 102-61 at home after leading from start to finish. What′s more important is that Akademik won by more than 9 points which will give the team an advantage in a possible tie between the two squads. Akademik is now with 5-5 record and on Thursday will visit Rilski Sportist. In the mean time Bashkimi has 5-6 record and in the last game of the regular season will visit Levski Lukoil on Thursday, again on March 8.

The game was already decided in the first seven minutes when the hosts made an incredible start. They score the first 26 points and never had any trouble after that. They continued with their good offense in the second quarter when the difference went over 30 points and the rest was just a formality.

Akademik scored 14 triples from 34 attempts compared to Bashkimi′s 9 of 28. The hosts also had 33 to 14 assists advantage while also having just 10 turnovers compared to 21.

Dimitar Dimitrov was the top performer for the winners with 19 points and 8 rebounds. Vasil Bachev did well finishing with 18 points as Martin Durchev added 12.

The visitors were lead by Vincent Zollo who had a double-double with 20 points and 12 rebounds. Mikaile Tmusic finished with 13 points and 7 assists while Qendrim Biraj scored 11 points.