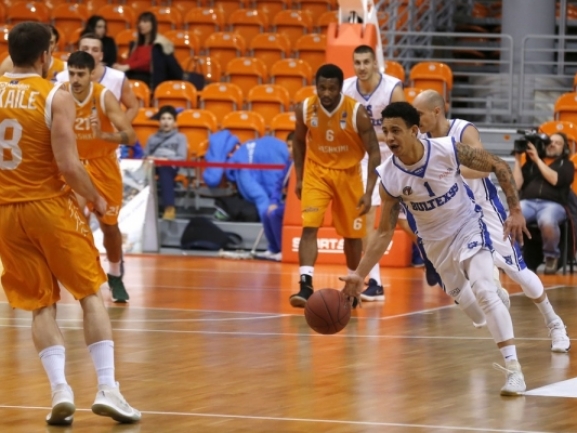 KB Bashkimi is the last team to qualify for the Final Four of SIGAL-UNIQA Balkan League. That happened after the team lost away to BC Akademik Bultex 99 by 86-94 but after the 13-point win in the first game that was enough. It all came down to the final 90 seconds when the difference was exactly 13 points but the visitors kept their cool and reached a historic first Final Four in the history of the league. In the semifinals the Kosovo side will play the hosts Rilski Sportist on April 14th.

The first quarter was high scoring and really even as no team was able to take any big advabntage. Than changed after the middle of the second period when the home side pulled away by 9 points but unfortunately for them they didn′t keep the good advantage. After Bashkimi finished the first half on a 13-5 run they closed the gap to just a single point and were right back in the game.

Akademik kept leading after the break and at some point made an 8-0 run to go up by 11. A bit later a triple by Gruev made the difference 15 points which also meant an advantage for Akademik in the overall score. Until the end of the third quarter the visitors managed to take it back to 13 and everything had to be decided in the final ten minutes.

At first Bashkimi managed to cut the deficit under 10 but Akademik rsponded really well and went up by 17. With 1:30 to play the difference was again 13 points and Moss scored a lay up for the visitors. Dimitrov answered with one free throw and after two bad attacks from the sides, Moss scored again to cut the deficit to just 10. Then with 26.6 seconds to go Bachev scored just one free throw and Moss answered with two of his own. Umipig again gave chances to Akademik with a triple and then Tmusic also scored two free throws. There was one more chance for the hosts to tie the overall score and send the game to overtime but Dimitrov missed and everything was decided.

The hosts scored 16 triples from 44 attempts compared to just 5 from 12 for the visiting side. Akademik also had rebounding advantage but allowed too many points after turnovers which proved to be costly at the end.

Dimitar Dimitrov had a double-double for the hosts with 24 points and 15 rebounds. Martin Durchev had 21 points and 6 assists as Isiah Umipig added 14 and 7.

Bashkimi was led by Mikaile Tmusic and Aaron Moss who both had 23 points as the American added also 11 rebounds and 8 assists. Frederic Stutz also did well finishing with 13 points and 6 rebounds.