KK Blokotehna: We are ready and going for the trophy 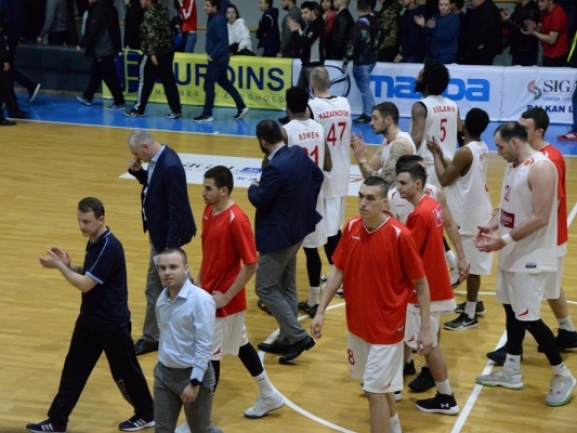 In its first season in SIGAL-UNIQA Balkan League, KK Blokotehna performed admirably and reached the Final Four. The Gevgelija team featured a lot of familiar names - management, coaches and players, who really managed to build a nice organization and team who showed some good basketball. So it was not a surprise that Blokotehna was the first team that secured its place in the semifinals and will now try to take the bigger step and reach the final.

Before the F4 we reached out with five questions to all the teams for the President, the head coach and one player. Here are the answers from KK Blokotehna:

Tomica Glavchev, owner of KK Blokotehna: "For us as a club, who competes first time in the Balkan league, this competition means a lot. First for the players who are in our roster this is good experience, because it′s a well known competition in which there are clubs from countries like Bulgaria, Albania, Kosovo and Montenegro. We can feel the effect even in the domestic championship in which we are second in the standings. Participating in the BIBL gives an opportunity to meet a lot of sports workers from the above mentioned countries. Those meetings gives us chance for getting together in sports and all other plans, which for us is important.  I think that because of the many international games we have, we contributed in promoting our country - Macedonia.

I′m present a longer time in this competition. In the past I was in the board of an another club and now I′m part from Blokotehna. With my experience, I have the right to say that for getting a strong character, especially the sports character of the club, it′s really useful to be part of such competition. In the end I would like to thank the management of the Balkan League and also the teams that helped in making this 10th anniversary season really interesting and competitive one."

Marjan Ilievski, head coach of KK Blokotehna: "During the whole season we showed that we are a team who gives its maximum in every game. Even handicapped with a short player rotation, and although all of our opponents have seriously changed their rosters, we have only one goal - to give our maximum as we did back in winning those matches. Compared to our opponent, we have a game in the domestic championship just days before the Final Four with a hope that we will have all our players healthy.

For us as debutants this season is successful, the position in the standings confirms that. The players had space and chance to show their qualities, and many matches to improve themselves playing against teams that have deeper rosters and many international games behind them. So in that way, these are the basis of the team."

Goran Glavchev, player of KK Blokotehna: "I think we are ready for the Final Four. In one game everything is possible and I think we can go for the trophy.

The most important for us will be to play our game which we used to play in the Regular season. If we play how we used to, I am sure that we can win against any team because we already showed that."