Konstantin Papazov: We deserved to be in the final 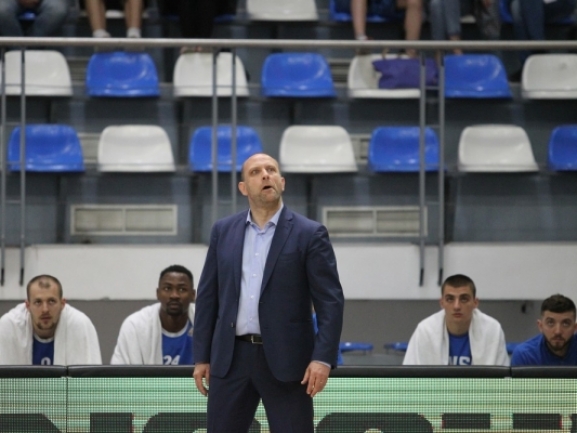 BC Levski Lukoil defeated KK Blokotehna-NB to reach the final of SIGAL-UNIQA Balkan League. In a hard fought game The Blues managed to come up better at the end and will fight for the trophy on Sunday. Here is what the head coach of the team Konstantin Papazov had to say after the game was over:

"It was a hard game but we deserved to be in the final. One thing is clear - when a team comes to a competition like a Final Four, the semifinal is the most difficult game. Our opponent was very good and we have to admit that we were lucky that Benjamin was injured. Yes, he played in the game but now after it′s over I can say that I think it was a mistake. If he wasn′t in the roster, the players of Blokotehna would′ve know he will not feature.

We played a game in which we started bad as our concentration wasn′t on a good level in the first minutes. Goran Glavchev is one of the team′s most responsible players but I think his shooting percentage today was more than his usual one. They had the advantage in a lot of periods in the game. I think the game was won in the final minutes of the first half when we entered the locker room confident that we managed to close a gap of 13 points. The biggest difference was at 29-16 and then when the score was 40-29 I took timeout and we finished the half on a 10-0 run. That run gave us the hope and took us out from the state of too much responsibility. Vesko Veselinov also helped us a lot in that moment with his experience.

Milosevic was in early foul trouble and wasn′t able to show his best performance. The style of our opponent is like this one - we have an advantage under the basket, they double teamed us and it gave us lot of chances for 3-point shots. We have 33 three-pointers attempted which is not our style and this is due to the fact that the opponent knew that with Benjamin′s absence they couldn′t play the right basketball with us.

We deserved to be in the final. Our opponents missed 8 free throws in the first half which gave us the possibility to be so close at the break."