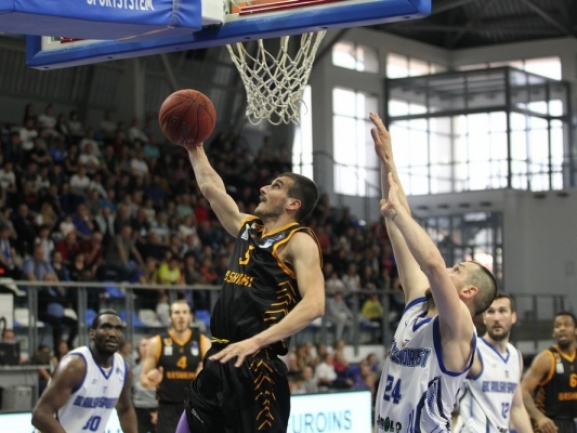 KB Bashkimi will play for the trophy in SIGAL-UNIQA Balkan League. The team reached its first ever final game in the competition after beating the hosts of the Final 4 BC Rilski Sportist 72-71 in a huge drama. The game came down to the wire with both sides exchanging baskets and leads in the final seconds. It was Aaron Moss who decided the outcome by scoring two free throws with 3.9 seconds to play. On Sunday Bashkimi will meet Levski Lukoil in the final while Rilski will play for third place against Blokotehna.

The hosts had the early lead but then Bashkimi started playing well and thanks to 8 straight points managed to go up by 5. Then they not only kept the lead but even increased it with good defense and after one quarter led by 10. The visitors kept their advantage early in the second period but Rilski started coming back. The hosts finally tied the score four minutes before the break and even managed to go in to the locker rooms leading by 1.

The big battle continued in the third period when the teams kept exchanging points. Rilski managed to up by 5 but Bashkimi answered with a 7-2 run to tie the score. The visitors finished better the quarter and took a 4-point advantage in to the last one.

The lead was increased to 8 points and for a few minutes the Kosovo side kept it. However the visitors missed a chance to go up by 9 and then Rilski scored three straight three-pointers to take the lead by 2. What followed was a lot of misses and mistakes from both sides before Biraj finally scored a triple to put the visitors up with 2.39 to go. Then there was no point from both sides for two minutes as Zlatin Georgiev was fouled and made both free throws. In the next offense Biraj missed but Zollo was there for the putback and Bashkimi retook the lead by 1 with 28 seconds to play. Rilski answered with a basket by Bozov 10 seconds later but with 3.4 seconds to go Moss was fouled. He made both shots from the line and then Bozov missed a long triple so the game was over.

The top performer for the winners was Aaron Moss who finished with 19 points and 9 rebounds. Vincent Zollo also did well with 15 and 9 as Frederic Stutz scored 13 points. The hosts shots 7 of 35 from the 3-point line which proved to much to overcome on the night.

The home side was led by Zlatin Georgiev who scored 18 points and grabbed 9 rebounds. Yordan Bozov finished with 17 points as Travis Taylor had 14 and 19 rebounds.