Aaron Moss: You can beat any team if you play hard and give your best 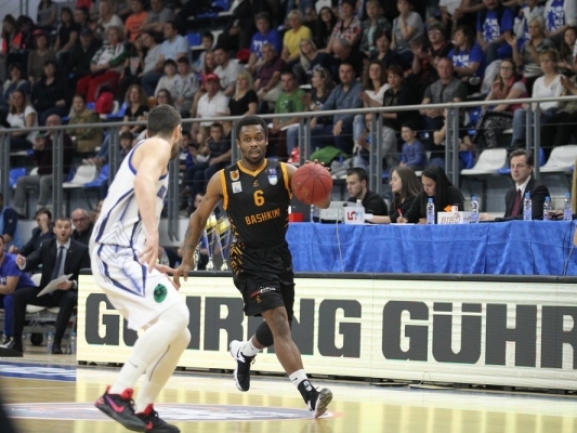 Aaron Moss scored the winning points for KB Bashkimi that qualified the team for the final. The American was also the top scorer for his team with 19 points and was the main offensive weapon. Here is what he had to say after his team′s win over the Final 4 hosts BC Rilski Sportist:

"First I want to take my hat off for Rilski Sportist who is a great host. They had a very good season in the Balkan League. The crowd came with energy. They didn′t start the game too good but got the crowd back in it by coming back and playing hard. I′m the kind of the player who, when the crowd gets loud, likes to show what he can do. That′s why we are getting paid to play basketball. I had a couple of late turnovers but I think I got it together when it mattered most.

My team played really hard. We′ve had a lot of injuries but every team has. If you go hard and give your best, you can beat any team.

We were down one point at the end so if I want to take big money, if I want to play hard and go to a higher level, I have to step up and who I can do big things. I know I can get to the rim when I want, I didn′t make a lot of easy shots but fortunately this time a made a couple of threes. I also made free throws when needed and like I said - our team was great. The captain Biraj and Tmusic hit some open shots and I don′t know whan I can say about Stutz - he played so hard. The coach put is in position to win the game and when we follow what he says - every time when he says do, we do and we win.

We are going to enjoy the win and then prepare for the final. You just have to get ready. Both teams played today. I can′t say that we′re tired because they had a close game as well, just like we did. Once the ball rolls out and after the tip-off, it′s time to play hard for 40 minutes. We are happy we′re here but there′s no point in going out without thinking about the win."