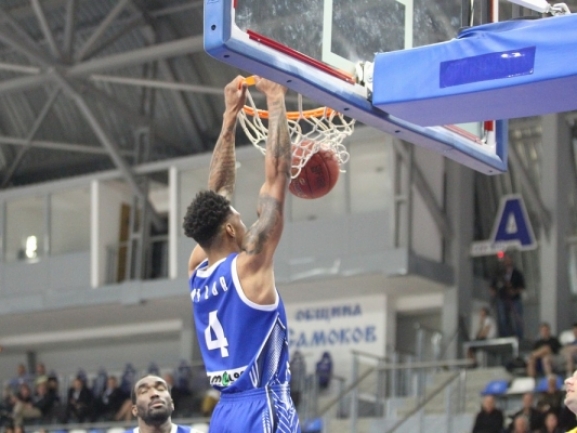 The hosts of the Final Four BC Rilski Sportist won the bronze medal in SIGAL-UNIQA Balkan League. The Samokov side defeated KK Blokotehna 92-79 in an overtime drama for the delight of their fans. The visitors from Gevgelija had a chance to win but missed it and in the extra time just dind′t have enough in the tank

The teams exchanged baskets early and then it was Blokotehna which made the first run. The Gevgelija side scored 7 points in a row to go up by 10 and kept that difference until the quarter finished. The second period started with 10-0 run for Rilski to tie the score. The visitors however didn′t allow them to take the lead and instead went up by 7 points. They almost managed to keep it but a Marinov triple cut the deficit to 4 at the break.

Rilski started the second half on a 6-0 run to take the lead but then Smith stopped it with a triple. Blokotehna had a small advantage before Rilski tied the score at 54. Then the visitors had the next 6 points and managed to be up by 4 after 30 minutes of play.

Blokotehna managed to take an 8-point lead early in the fourth but then Rilski quickly closed the gap to just 2. What followed was baskets from both sides and then with 3.06 to play Wright tied the score. The visitors answered by scoring but then Marinov hit another three for the hosts. After exchanging leads again Mijatovic scored a basket and a free throw to put Bloko up by 2 but then both teams missed. With 18.8 secomds to go Ravenel was fouled and he made both free throws to tie the game. There was enough time for Blokotehna but Smith missed a lay up and it went to overtime.

In the extra time the visitors couldn′t find a basket and the home side took advantage of it. When Wright scored a triple with 1.54 to go, their lead went up to 7 points and when Bloko missed again and after Jeter made a lay up, the game was decided.

Martin Marinov was the top scorer for the winners with his 25 points. Travis Taylor had a double-double with 18 and 11 rebounds as Derek Wright added 12 points, 7 rebounds and 7 assists.

Blokotehna was led by Danilo Mijatovic who finished with 31 points. Marjan Mladenovikj added 16 and 9 rebounds while Shakir Smith scored 9.