And the winner is Levski Lukoil! 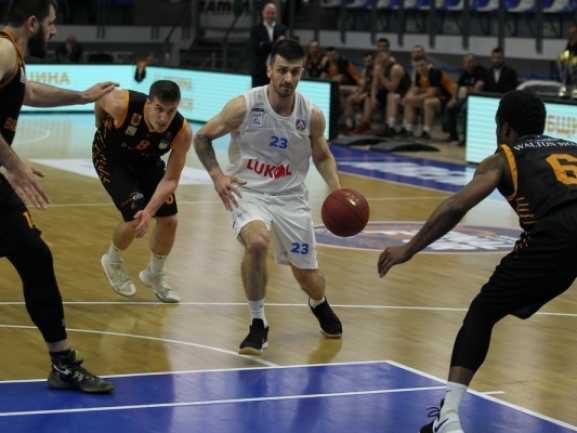 BC Levski Lukoil is the new champion of SIGAL-UNIQA Balkan League. In the final game the team defeated KB Bashkimi 83-72 to lift the trophy. The Blues took the lead near the end of the first half and never looked back after that. The Prizren side fought hard until the last moment but couldn′t overcome a lot of missed opportunities and the opponent′s deeper rotation.

Bashkimi came out very strong and even didn′t let Levski take any kind of lead in the beginning. The Prizren team managed to pull away first by 6 points and then by 8 but The Blues finished the quarter by scoring 5 in a row to cut the gap. Despite that Bashkimi kept leading early in the second period but when Marinov scored two straight triples, the score was tied at 30 points. Shortly after Levski took its first lead of the game with 2.30 to go in the first half and took a 5-point advantage in to the break as Bryant hit a triple with the buzzer.

In the first minutes of the third quarter Levski managed to go up by 9 but Bashkimi hit back with a 10-2 run to close the deficit. Coach Papazov took a timeout and the reaction was good. The Blues made an 11-2 run and took its first double-digit lead of the match but Bashkimi scored the last 6 points of the period to come back in to the game.

Two straight triples by Pavlin Ivanov capped an 8-0 run for the start of the fourth quarter which gave Levski a 12-point advantage. That proved to be the decisive moment of the game as after that Bashkimi didn′t recover after it and never got close enough.

Levski hit 14 triples from 35 attempts which compared to just 5 of 18 for Bashkimi proved to be too much.

Bozhidar Avramov was again the top scorer for the team with 21 points while Stanimir Marinov added 20. Nemanja Milosevic also did well with 13 points and 7 rebounds.

The visitors were led by Frederic Stutz who finished the game with 21 points and 8 rebounds. Aaron Moss added 18 points, 8 rebounds and 6 assists while Mikaile Tmusic scored 15 points.