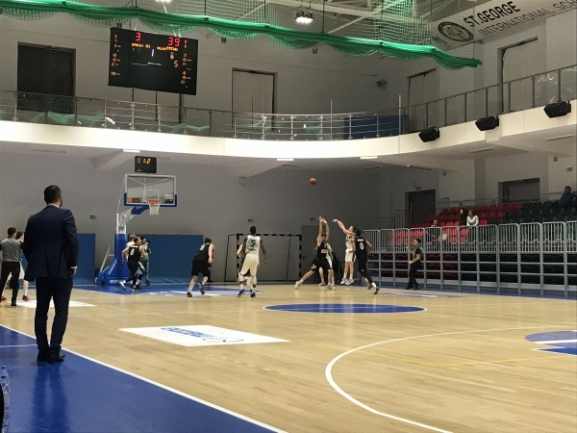 KK Blokotehna defeated BC Barsy Atyrau 83-70 in an interesting game played in Sofia. It was the last one of the season for the team from Kazakhstan and again the players fought hard. However in the final minutes the experience of the visitors was too much to overcome as The Gevgelija side continues its fight for the top position before the Final Four. Barsy was close in the final quarter but two timely baskets were enough for the Macedonians.

Barsy finished the season with 1 win and 11 defeats but the team left very good impression with its performance as it was close to victories in most of the games. Blokotehna is now at 8 wins and 2 defeats and next week will visit Bashkimi in Prizren.

The visitors had a very good start to the game and took an early 10-2 lead. After that the team controlled the score and were in front not allowing Barsy to take the advantage. The visitors also led by 5 after ten minutes and increased the advantage to 8 after 20. Barsy however was willing to fight and came out strong in the second half. The team even managed to go up by 1 point but Bloko responded with 6-0 run to finish the third quarter and was up by 5. In the final one the hosts stayed close but when Penn scored a triple with 1.20 to play the game was decided.

Danilo Mijatovic was again the top scorer for the winners with 25 points. Brandon Penn had a double-double with 20 points and 11 rebounds as Petar Nikolikj had 9 points.

Christopher McEachin was the best scorer for Barsy finishing with 25 and he also had 10 rebounds for a double-double. Oleg Balashov also did well by adding 16 points while Vladimir Ivanov had 15, 7 rebounds and 3 assists.