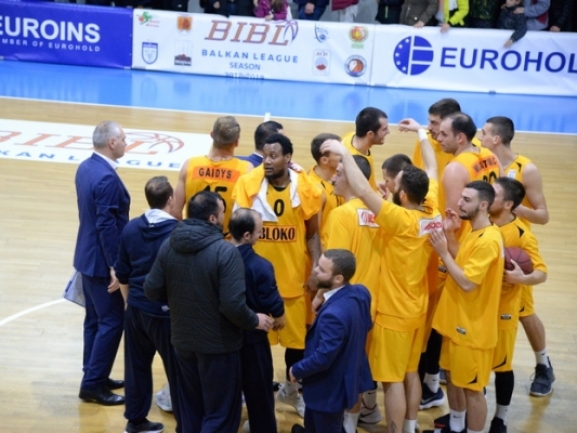 KK Blokotehna recorded its fifth win in a row in the Balkan League after beating KB Bashkimi 92-77 away. The Gevgelija side took a good advantage after a better second quarter but in the final one the hosts came back. However the visitors′ experience showed out and they managed to win without having problems at the end. With that win Blokotehna now has 9-2 record and moved in to second place. Next week the team will host Beroe in a match that will decide the first place in the Regular season.

As for Bashkimi it was the last match of the campaign as the team finishes on 6th place with 2 wins and 10 defeats.

It was a very even first quarter as the visitors finished it up by 4 points after making 4-0 run. In the second though they did much better in offense and increased their lead to double digits. That happened early in the period with 8-2 run and later Blokotehna went up by 16 which remained the difference until the break.

The home side however didn′t give up and tried to come back in the second half. The visitors were still leading but with a good finish to the third quarter the difference went down to 10. Early in the fourth quarter the hosts cut the deficit to just 4 points and got right back in to the game. The visitors however managed to close it out by making a 7-0 run which made the margin 13 points with less than two minutes to go. Bashkimi didn′t score a single point in the final 4:20 minutes as the visitors stepped it up on defense to finish in style.

To no surprise it was once again Danilo Mijatovic who was the best for the winners finishing with 27 points and 8 rebounds. Brandon Penn also did well by adding 20 and 9 as Bojo Djumic had 14 points.

The hosts were led by Lamar Wofford-Humphrey who had 22 points. Michael Martin added 18 and 6 rebounds as Drilon Hajrizi had 15 points, 6 rebounds and 6 assists.