The teams at the Final 4: BC Academic Bultex 99 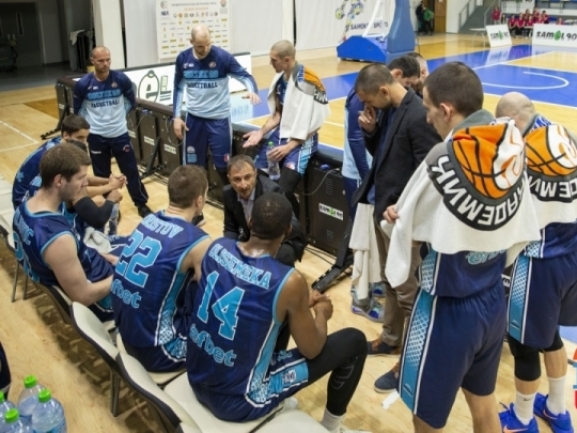 When you go a step higher than the last time, then that means you′ve done better. That is the case with BC Academic Bultex 99 in the team′s second season in the Balkan League. The Plovdiv side qualified for the Final Four by finishing third in the Regular season with 8 wins and 4 defeats. It′s a tie with KS Teuta but the Bulgarian team holds the tie-breaker advantage due to the bigger win in Plovdiv than the loss in Durres.

In the first semifinal at SIGAL UNIQA Balkan League Final Four BC Academic Bultex 99 will have the task to play against KK Blokotehna-NB. Those teams met twice this season and exchanged wins on their home courts. The game in Tirana though is a completely new territory and much more different than those during the Regular season.

The backcourt duo of Daishon Knight and Vasil Bachev was the one that led Academic to that position. The American averaged over 20 points but left in order to join Mornar. The team moved quickly to find a new replacement and signed Troy Franklin who had an impressive debut with 24 points and 13 assists against Kozuv. His performance and the one of Bachev is usually the key to any success for the Plovdiv squad. The Bulgarian guard is averaging 14.9 points and can catch fire from 3-point range at any time. It′s not a surprise that he received a call-up for the National team so he′ll have to be up to the task in Tirana. The experience of Aleksandar Gruev will also be important as he knows what is it to win the competition - back in 2009 he was the first to lift trophy in the debuting Balkan League season at the F4 in Samokov. The never ending energy of Adriyan Sekulov is also something Academic relies on. Whether he plays 5 or 15 minutes, he always gives 100% and was instrumental for some wins. The fifth player on the perimeter is Venelin Hristov. Nobody expects from him to score a lot but he is doing a lot of little things, including usually guarding the opponent′s best backcourt player. Like Sekulov, Hristov is also playing with a lot of energy, and when he keeps himself out of foul trouble, is really valuable.

Under the basket the rotation consists mainly of three players - Peter Olisemeka, Mladen Vitkovic and Nikola Vujovic. All three startedthe season with the team and have contributed to the success. Olisemeka is the one giving the energy under the basket. He shoots with high percentages, is the second best rebounder in the league and rarely doesn′t get a double-double. His motor is important to Academic′s performance so that′s why his play in the F4 will be important. Vitkovic is the power forward of the team and while the stat line doesn′t show it, he does some little but really important things. Added to the roster as a shooter, the Serbian accepted his role and the first thing he looks for is to play the best possible defense and not to force anything on offense. The other Serbian - Vujovic, offers a different style of play than Olisemeka at the center. He is an old school type of player, not as mobile but has the moves to do damage inside. When on a good day he can hardly miss a shot so Academic will hope one of those days will be next Saturday.

The Plovdiv team started the season with Darko Kostic as a head coach but it was just a matter of time before the former one - Asen Nikolov, returned to the bench. Early on the team wasn′t performing as well as it could and just before the end of 2018 the coaching change was announced. That immediately proved to be the right decision as the team′s performance improved and the F4 qualification was sealed. Nikolov is a great motivator and often makes the team play at its best and performing to a level not a lot of people expect. The Final 4 is something new for him as well but he already has enough experience to prepare his side in order to perform in the best possible way with the hopes of lifting the trophy.

On paper, the semifinal between Academic Bultex 99 and KK Blokotehna-NB looks the more even one. Before the season the Plovdiv team had the goal to just reach the Final 4 and it did it in style. Now though, being closer to the title, makes you want it even more and we should expect Academic to play with p?ssion and energy as it does most of the time. Whether that′ll be enough to win it′s not clear but nevertheless generally the season was positive for them. Academic also has the youngest player to take part in a Balkan League game in 2004 born Simeon Dimitrov. Of course he is still not a regular part of the team′s rotation but the team deserves to be praised for the fact that he gets chances at such young age.