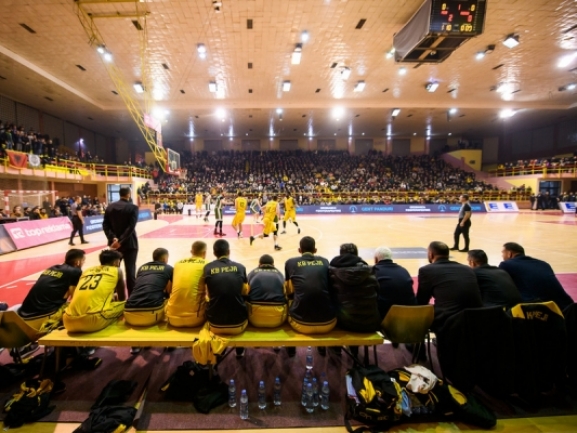 KB Peja started 2020 in style after downing KK Ibar 94-80 at home. The Yellows dominated the game from start to finish and celebrated a great win in front of a packed gym. It was also Dardan Berisha′s first game for the team in more than six years and it contributed to the excitement. With this win Peja now has 3 wins and 3 defeats and next week will visit Vllaznia. Ibar in the meantime is with 3-2 record and will travel to Plovdiv to play Academic Bultex 99.

Peja got off to a good start taking 12-4 lead in the first four minutes. The damage though was made in the last 3:30 of the first quarter when with a 14-4 run the difference reached 17 points. In the second quarter the hosts continued to build an advantage and thanks to good defense and solid offense went up by 28 points at the break.

The visitors however came out a different team in the second half and showed that by scoring more points in the third quarter alone then the whole first half. After scoring 31 points and allowing just 18 Ibar closed the deficit to 15 and gave themselves some sort of a chance before the final ten minutes. A 10-2 start to the final quarter however gave Peja a 21-point advantage and the team cruised on until the end.

Berisha had a very good game and finished as top scorer for the winners with 23 points. Henrik Sirko had a double-double with 22 points and 11 rebounds while Arti Hajdari also did well in his return by adding 13 points.

The visitors were led by Nemanja Gavranic who scored 26 points. Nemanja Simovic was also a danger for Peja as he added 25 points, 7 rebounds and 6 assists.