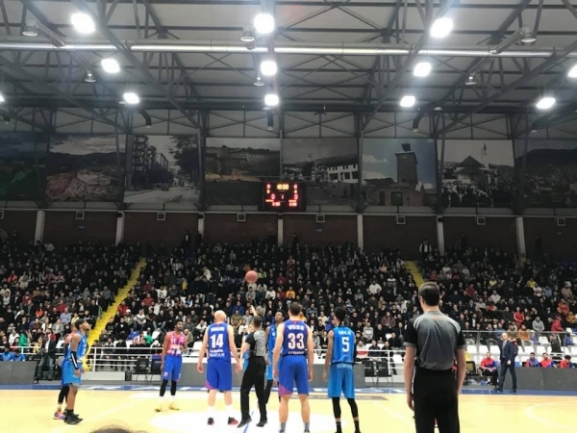 KB Rahoveci recorded its second win of the season in the Balkan League. The team hosted KB Vllaznia and in a very entertaining encounter took 78-73 victory which happened in the final seconds. With 22 to play Darrell Davis scored a triple to put his team up by 3 and the visitors missed their next shot from behind the arc and eventually lost by 5. After that win Rahoveci moved to fourth place in the standings with 2-5 record while Vllaznia is behind with 1-6. Both teams have one game left in that stage with Vllaznia hosting Academic Bultex 99 on Wednesday while Rahoveci visiting Ibar in February.

It was a close game throughout with neither team being able to take a big advantage. They exchanged leads with the visitors being in front a bit more and after both quarters in the first half by winning them. Things continued the same way in the third with both exchanging baskets and leads as the visitors were up by 2 after 30 minutes thanks to a triple at the buzzer. In the final quarter the visitors went up by 5 with 02:40 to play but the home side responded by closing it to 1 and eventually tying the score. Then the visitors missed twice in the same offense and it was time for Davis′ moment who hit a triple with 22 seconds to play. On the other side Ross missed a three-pointer and Veseli was fouled. He didn′t score his both free throws but Rahoveci managed to keep the ball and it went to Veseli under the basket who scored and set the final score.

Davis was also the top scorer for the winners with 25 points. Joshua McFolley added 14 while Altin Morina had 12.

The visitors were led by Petar Kusovac with 27 points as Jaylen Babb-Harrison had 14. The team also had 21 turnovers in the game which compared to just 8 for the hosts proved too much to overcome.