Strong first half gives Beroe a big lead in the final 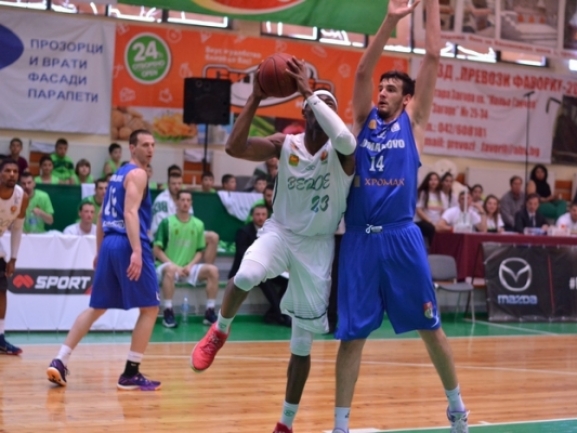 BC Beroe managed to take a very good lead after the first Final game of SIGAL UNIQA Balkan League. The Greens defeated KK Kumanovo 2009 84-55 at home and are going to Macedonia with a big advantage. The home side played a very good first half in which it built this big lead and after the controlled the difference. The return game is next Tuesday, April 18th, in Kumanovo when the trophy will be awarded.

Both teams had a tough start before Beroe took over with a 9-2 run. It gave the hosts a 6-point edge which they kept until the end of the first quarter. In the second they continued to have the lead which was hanging around 10 points. However after a great 11-1 finish to the first half Beroe took a great 21-point advantage after only 20 minutes.

In the third quarter the visitors tried to close the gap and went down to 17 but the hosts responded. After that the Greens again controlled the difference which was around 20 points. An 8-0 run in the fourth period increased the advantage to 25 and then with 5 points in the last 12 seconds it reached 29.

The MVP of BIBL season Shane Gibson was the top performer for the win with 25 points, 8 rebounds and 4 assists. Omari Gudul had 16 points as Aaron Jones had a double-double with 12 and 12 rebounds.

Dimitar Karadjovski was the top scorer in the visiting team with 14 points as Stefan Zivanovic added 13. Kumanovo however missed 10 of 18 free throws which also contributed for the big difference.