And the winner is Blokotehna! 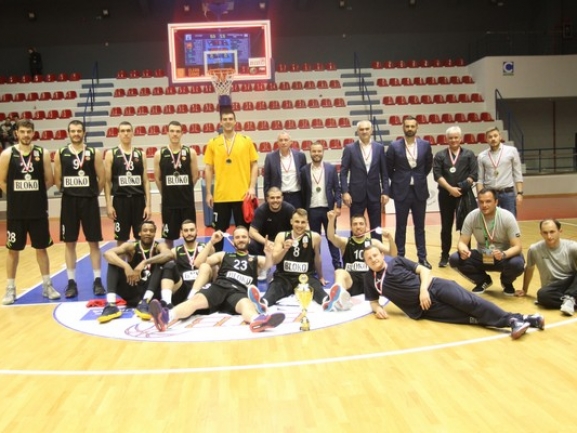 KK Blokotehna-NB is the new champion of the Balkan League. In the final the Gevgelija team dominated KS Teuta and won convincingly 82-68. The outcome was never really in doubt after a great start to the North Macedonian side. Already in the first few minutes they built a big advantage and controlled the game until the end to take the trophy in the team′s second participation in the competition. Teuta on the other side felt the pressure of the team′s lack of experience in international games and that reflected on their performance. Still though for the team to reach to the trophy game at SIGAL UNIQA Balkan League Final Four was a big success.

The first quarter was all for Blokotehna as the team played strong defense and forced a total of 11 turnovers for Teuta. The Macedonians started strong  to take an 11-2 lead and continued building on the advantage. The turnovers led to fast break for Blokotehna and the difference reached 19 points before Vilotijevic cut it to 16 at the end of the quarter. Teuta came out different in the second but only managed to close the gap to 7. The team from Gevgelija reacted, again took a double-digit lead and at the break it was 12 points thanks to a Brown triple just before the buzzer.

Instead of Teuta making a hot start after the break, it was Blokotehna who came out strong. The Gevgelija team went on a 12-3 run to open the third quarter and made the difference 21 points. From that moment on the players of coach Ilievski managed to control the score, the game and the advantage and went on to win and lift the trophy.

Blokotehna′s strong defense proved to be the key for the win. The team forced 25 turnovers to its opponent and they capitalized on that having a 28-7 advantage in points of turnovers.

Brandon Penn was above all for the winners with 31 points. Bozo Djumic did well under the basket notching a double-double with 17 and 10 rebounds while Petar Nikolikj had 15 points.

Teuta was led by Julian Hamati with 18 points. CJ Wilson and Zoran Vilotijevic added 13 apiece but generally the team′s was outplayed in the final.